I'm happy to at last reveal the cover art for The Eagle's Heir, my interactive novel with Amy Griswold which will be released on March 30 by A Choice of Games!

A small teaser from the flashback in Chapter One, with your grandmother, Madame St. Elme...

Each afternoon you practiced with Alexandre.  Your grandmother watched you go through the drills together, quatre to cinq with blades extended, side by side in shirts and breeches, while the sweating instructor corrected your stance and grip.  In the carriage on the way home she put her arm around you.  “I learned that way when I was your age,” she said.  “With my brother who died.  Our father was a fencing master.  It’s a very useful skill.”

“True.”  Your grandmother took off her glove and showed you the long scar across her palm.  “Waterloo,” she said.  “I caught a saber cut with my off hand that would have killed me.  I was wearing heavy gloves so it didn’t take off my fingers. I’ve bled a great deal in the Emperor’s service.”

Your grandmother seemed to consider your question very carefully.  “Because he’s the best monarch alive.  We have a constitutional monarchy, with a Legislative Assembly and a Senate who help make the laws.  We have a constitution.  We’re the only country in Europe that does, or was until some of our protectorates got them.  All of the other monarchs are much worse.  Would you rather live under the Austrian Emperor?  He’s an absolute monarch.”

“Or how about George IV in England?  His father was mad and he does nothing but spend money.”

“Or a Bourbon restoration, as the powers of Europe would have us take?   To restore the old regime and go back to the way things were before the Revolution?  Before the Revolution I couldn’t have had my own bank account or the lease on my house in my own name.  I would have had to belong to a man.”  Your grandmother shook her head, her bonnet plumes nodding.  “The Emperor is our best chance for freedom and progress.  He’s not perfect – heaven knows!  I’ve known him very well for years through many ups and downs.  But he’s our best hope for the future.”

“But what about a republic?”

Your grandmother’s face was solemn.  “The powers of Europe will never allow that.  A republic endangers all their thrones.  They’re frightened enough by our constitutional monarchy, where the Emperor serves by plebiscite vote.  That’s why it says what it does on the coins – Napoleon Emperor of the French, not Emperor of France.  The country doesn’t belong to him.  He belongs to the people.”

It was a lot to understand.  “And what happens next?  Who is his heir?”

Her voice was quiet.  “That is the problem.  The Emperor made a marriage of state to Princess Marie-Louise of Austria.  Their son was only a year old when the Emperor was forced to abdicate and go to Elba.  He escaped, thanks to the work of many who were loyal to him, and regained his throne.  After Waterloo the powers of Europe have never dared to challenge him in arms again.  But his son was gone.”  She looked out the carriage window, her face sad.  “You are too young to understand this yet.”

Now, fifteen years later you understood.  The Emperor’s legitimate son had been taken back to Austria by his mother and had been raised by the Austrian Emperor.  The only other heir was Alexandre. 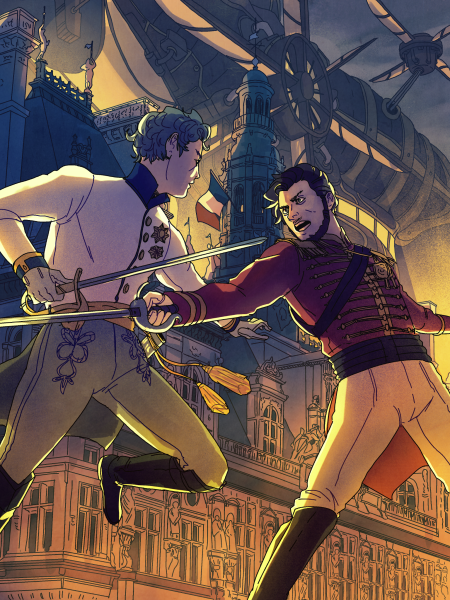